The ghost of a legendary gunsmith and inventor

Samuel Colt was a famed gunsmith who gained fame and fortune after inventing and manufacturing a series of pistols and rifles.

In 1855, while setting up a branch of his business in England, Colt stole the Ark of the Covenant from the Temple of Solomon and took it back to America. He called it ‘The Box’ and developed a number of advanced weapons and inventions using the blue crystals inside it.

Colt died of an apparent heart attack in 1870 when confronted by Fancy. His spirit found no rest and lingered as a ghost, blaming Fancy for his death.

At some point in the intervening years, Elijah encountered the ghost of Colt, and the spirit inspired the ex-Templar to redeem himself.

Colt’s ghost has some insight into the mysterious events unfolding in Tribulation, but communicates in cryptic statements. It normally only appears to Elijah, but has also visited Emmett to warn him of a coming crisis. 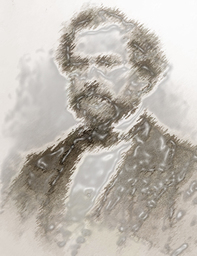