Psychotic roustabout from the Carnivale

Grundy was a former trapper and mountain man who worked as a roustabout for the Carnivale for the last twenty years or so. Clumsy and introverted, he was befriended by the teenage Cruz until the boy left after the apparent death of Fancy.

When the Carnivale came to Tribulation, Grundy was somehow corrupted or changed by an unknown force; he became psychotic but also gained the power of invisibility. He fled the Carnivale and murdered a local prostitute, apparently as some kind of gift for Cruz; he also kidnapped Fancy and Sarah Olsen.

Elijah, Cruz and Emmett tracked Grundy to the long-abandoned orphanage outside town, where Elijah gunned him down before he could kill Cruz. Glend watched this from hiding and then took a sample of blood from Grundy’s corpse, hoping to learn how he could become invisible. 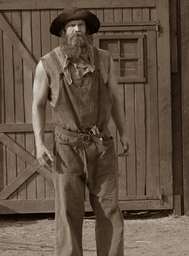