Red Harlock is a gang leader and former Regulator, an ex-Confederate soldier who wants fame, money and a chance to settle grudges from the war. His gang robbed banks, stagecoaches and towns across Texas and New Mexico.

Red and his gang came to Tribulation in an attempt to derail and rob a train carrying US Army wages. He was stopped by Sheriff Elijah and his compatriots and hauled off to jail in Albuquerque. 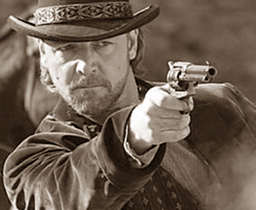