Mystical warrior of the Miagani Apache

Little is known of this man save that he is a member of the Miagani Indian tribe. He has been an attraction at the Carnivale for around 15 years, and Dr Caligari named him ‘The Apache Super-Chief’, although his true name is Saganowahna. He does not speak and appears to be enslaved or held against his will by Caligari.

When Tala attacked the Carnivale, the Super-Chief saved Cruz from a wolf, but then lapsed into a passive state and could not be roused.

The Super-Chief has a massive chunk of blue crystal embedded in his chest which apparently gives him superhuman abilities, including great strength.

Twenty years earlier, in 1859, the young Saganowahna met Emmett and Sarah when they fell through a time vortex. At this time Saganowahna was a peaceful man, not a warrior, and did not possess the crystal in his chest. 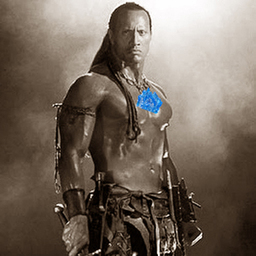