Mystical warrior of the Miagani Apache

Little is known of this woman, save that she is a member of the Miagani Apache tribe and possesses some form of supernatural power thanks to the sliver of blue crystal in her forehead.

Tala sent a pack of wolves to attack the Carnivale, but was driven off by Cruz. She then attempted to steal a gadget from Emmett’s workshop, but when he confronted her it caused some form of temporal instability and she ran off. Glend tried to capture and interrogate her, but she found him off and escaped.

Emmett later tracked Tala to the clock tower, where she was performing some kind of chant; when he approached, a temporal instability occurred again and Tala, Emmett and Sarah fell through some kind of vortex.

Tala is a skilled hunter with the ability to command wild animals, along with some kind of supernatural influence over time. 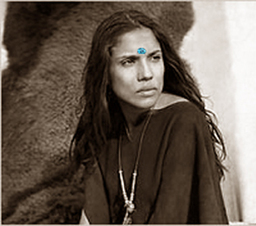