A gambler and gunslinger with incredible luck and a dark past

Know When to Fold ‘em d6

Cruz remembers little of his life before he joined the Carnivale as a boy. He lived with them for ten years, befriending Grundy and the Super-Chief and having an uneasy relationship with Dr Caligari.

Fancy joined the Carnivale when Cruz was 18 and the two of them fell in love. When Fancy was apparently killed, Cruz fled the Carnivale. He spent the next ten years wandering the west, learning the ways of the gun and the deck, before coming to Tribulation and becoming embroiled in strange goings-on. 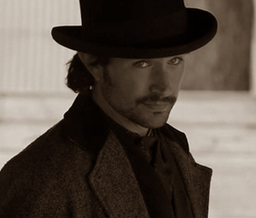