Delian Sisula is a wealthy magnate with national business interests. He is also a powerful psychic and leader of the Agency, who has a secret plan for taking power over all of America and perhaps the world. This plan involves Tribulation, the Box, the Carnivale, the Miagani Indians and something in the Sierra Blanca Mountains.

Delian previously lived in Tribulation twenty years ago, where he was a local businessman and property owner. He apparently left under a cloud after failing to convince the Texan Army to attack the Miagani.

Delian is smart, cunning and ruthless, but also a visionary who wants to craft a lasting destiny for his people. He possesses a number of psychic gifts, including telekinesis and telepathy, and has developed a number of unusual inventions using Samuel Colt’s plans and the crystals from the Box.

Although Cruz does not know it, Delian is actually his father. 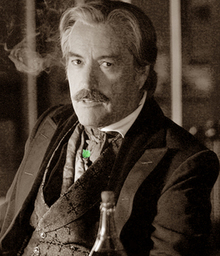