Sheriff of Tribulation and immortal wanderer

The man called Elijah was recruited by the Temple of Solomon in the 12th century. The power of the Ark of the Covenant made him immortal, and he spent centuries hunting monsters as one of the Knights Templar.

At some point Elijah fell from grace and left the Temple, following a dark path until encountering the ghost of Samuel Colt. The ghost showed Elijah the way to redemption and led him to Tribulation to face the events unfolding there. 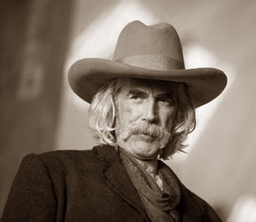