Agent of the Temple of Solomon

Fancy is an agent of the Temple of Solomon, although not a true Knight Templar.

As a young woman, Fancy was one of the Temple agents searching for the missing Ark of the Covenant. To aid in her search she joined up with the Carnivale and travelled with it around America – and fell in love with Cruz, who was also part of the sideshow.

In 1870 the Carnivale came to Connecticut and Fancy detected the Ark in the possession of Samuel Colt. She confronted Colt, who died of an apparent heart attack; in the confusion, Delian Sisula then stole the Ark. Cruz believed Fancy had been murdered and fled the Carnivale.

Years later, Fancy has come to Tribulation to seek out the ‘Prometheus of Clocks’, a figure from the Temple’s prophecies, who she believes to be Emmett. She has also revealed herself to Cruz and Elijah, and is again trying to take back the Ark.

Fancy is a clever, strong-willed woman who is skilled in combat and the lore of the Templars. She carries a dagger imbued with some kind of supernatural power and is sometimes accompanied by a tame eagle.

Although Elijah does not know it, Fancy is his daughter. 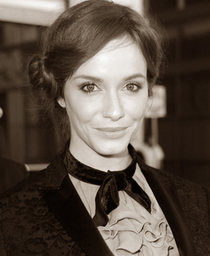